Treat knowledge like seeds – scatter it, then watch it grow.

Likely August 2022 , Chair, International Meeting ‘Forming and Exploring Habitable Worlds‘. This event is aligned with my interests in research and training, as well as a current and commissioned book project of mine. (link) 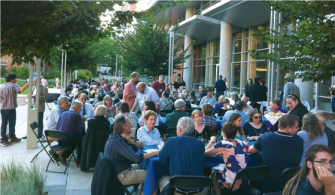 2013, Member (1 of 4) of the local organising committee
76th Annual Meeting of the Meteoritical Society. Edmonton, Canada.
Chair – Chris Herd. ~325 international delegates: Meeting Report in Elements
In this role I reviewed contracts, recruited and corresponded with the logo designers, assembled and led team of over 30 volunteers across this complex and multi-venue conference, actively contributed to meetings of our local organising committee, and also liaised with A-V team and institutional conference support during the event.

Organisation of scientific sessions and some peripheral activities

2015-present
I run a mailing list that reaches roughly ~500 scientists around the globe to advocate for the activities of my field. To continue to promote a cooperative spirit and useful interdisciplinary discussions relevant new publications, conference sessions, and support of travel funds for early career researchers brief messages are circulated at intervals and at the request of community members.

2017
To foster friendly exchange in our community I organised an informal picnic for HSE scientists and friends during Goldschmidt2017, Paris, France.

2020, Selected for a spotlight feature on the social media of the American Geophysical Union. Link

2019, Feature in the American Astronomical Society’s Committee on the Status of Women in Astronomy. Link

2019, Collaborative research with colleagues in New Zealand, Canada, and China, and arising from a National Geographic Waitt grant that I PI’d, was featured in a Nature Research Highlight in January 2019. Link

2016, I provided guidance and was quoted in a ScienceNews article by Alexandra Witze exploring emerging themes in planet scale studies of iron-loving elements. This article included material presented at the 4th HSE Workshop. August 6th Edition, 2016. Alexandra is the 2016 winner of AGU’s David Perlman award for excellence in science journalism. The readership of Science News is over 200,000 and engages over 4.1 million school children and educators in STEM through the publisher’s High School’s program.

2016/2017, 4th International Workshop on Highly Siderophile Element Geochemistry in the news:
Selected to be featured in the Geochemical Society News in Elements,
Elements has an impact factor ~4.5 and reaches a membership in excess of that of the 17 international participating societies involved.
Full Meeting Report in Elements
Featured on the EAG blog (open access)
Iron-loving elements feature in ScienceNews

Over 30 invited talks given since 2008 in institutions of the UK, USA, and Canada.
e.g., U of Manchester, UK, U of British Columbia and U of Alberta, Canada,
U of Tennessee, USA.

2017, Durham Café Scientifique. ‘How and what we learn from planets and asteroids.’
2015, Royal Tyrrell Museum Speaker Series (invited), Canada. ‘Messages from Meteorites’. Attended by ~200 and available online where it has been viewed by ~5K people.
2008, (invited) East Midland’s Geological Society Speaker at BGS, Keyworth, UK. ‘Earth Evolution: Insight from Orogenic Peridotites’.